This has nothing to do with my trip but I could not resist sharing some of the 71-year-old's most famous gaffes from a lifetime in football.

We didn't underestimate them, they were a lot better than we thought.

All right, Bellamy came on at Liverpool and did well, but everybody thinks that he's the saviour, he's Jesus Christ. He's not Jesus Christ.

We don't want our players to be monks, we want them to be better football players because a monk doesn't play football at this level.

I played cricket for my local village. It was 40 overs per side, and the team that had the most runs won. It was that sort of football.

I said to the lads in the dressing room at half time, I said, there was nothing to say.

They're two points behind us, so we're neck and neck.

Well, we got nine and you can't score more than that.

He never fails to hit the target, but that was a miss.

There will be a game where somebody scores more than Brazil and that will be the game they lose.

He's very fast and if he gets a yard ahead of himself, nobody will catch him.

The first 90 minutes of a football match are the most important.

Dennis Law once kicked me at Wembley in front of the Queen in an international. I mean, no man is entitled to do that really. 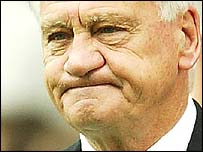